Her latest book is Victims’ Stories and the Advancement of Human Rights.  It’s now available from Oxford University Press (https://global.oup.com/academic/product/victims-stories-and-the-advancement-of-human-rights-9780199930401?q=diana%20tietjens%20meyers&lang=en&cc=us) and is also  available from Amazon (http://www.amazon.com/Victims-Stories-Advancement-Human-Rights/dp/0199930406/ref=sr_1_7?ie=UTF8&qid=1456502403&sr=8-7&keywords=diana+tietjens+meyers).

Related blog posts can be found here: http://blog.oup.com/2016/05/human-rights-isis-yazidi-women/ (For a video of a Yazidi woman’s testimony concerning abuse of women and girls captured by ISIS, be sure to click on the link to the UN Security Council Meeting.)

A symposium about the book with papers by Vittorio Bufacchi, Serene Khader, and Andrea Westlund and a response by DTM is available here:  http://onlinelibrary.wiley.com/doi/10.1111/meta.2018.49.issue-1-2/issuetoc.

Her previous monographs are Inalienable Rights: A Defense (1985, Columbia University Press), Self, Society, and Personal Choice (1989, Columbia University Press), Subjection and Subjectivity: Psychoanalytic Feminism and Moral Philosophy (1994, Routledge), and Gender in the Mirror: Cultural Imagery and Women’s Agency (2002, Oxford University Press; also available through Oxford Scholarship Online). Being Yourself: Essays on Identity, Action and Social Life (2004, Rowman and Littlefield) is a collection of two new essays and some of her previously published essays.

She has edited and co-edited many books and special journal issues. Her latest edited collection, Poverty, Agency, and Human Rights, appeared in 2014 (Oxford University Press, https://global.oup.com/academic/product/poverty-agency-and-human-rights-9780199975884?q=diana%20tietjens%20meyers&lang=en&cc=us). Many of her papers as well as Self, Society and Personal Choice are available through PhilPapers at http://philpapers.org/profile/51076.

Professor Meyers is currently writing on three topics:  human rights, art and politics, and psychocorporeal identity and agency. Please visit her PhilPapers page or her Academia page for access to some of her work: http://philpapers.org/profile/51076 or https://learn-uconn.academia.edu/dianameyers. 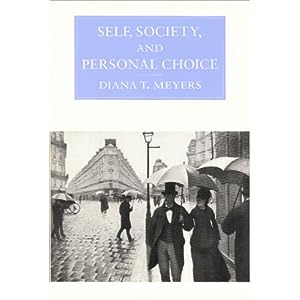